Custom Treatment Plans For Your Industry

What Makes Us So Stinkn’ Special?

What We've Been Up To

Tools & Resources For The Inquiring Mind

Take the Next Step

Get a FREE Quote Request a Call


Exotic Plant Control The Natural Way with the APB

Over the years we’ve developed a real specialty for exotic plant control, slowly restoring Florida to its natural vegetative state by methodically removing invasive species from Florida’s land and waterways. We’ve physically and chemically removed everything in the invasive species index, from alligator weed to wild taro. So, you can imagine our delight in leveraging one of nature’s great rivalries, Dioscorea bulbifera (air potato) vs.Lilioceris cheni (air potato beetle), to help us on our mission of restoration. 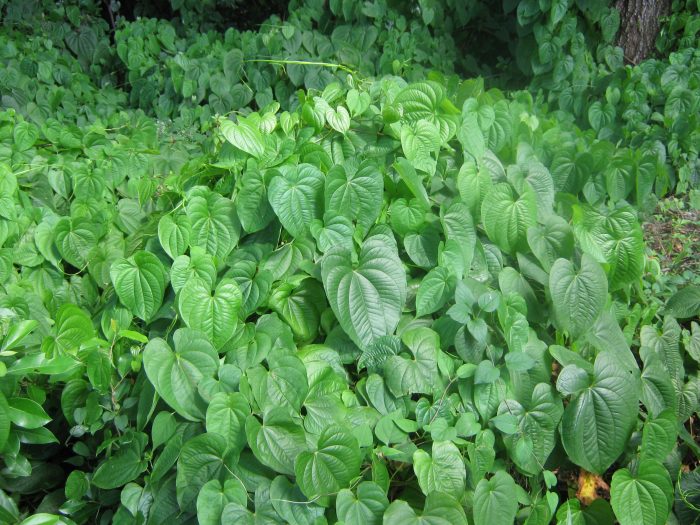 Air potato, Dioscorea bulbifera, a species of true yam, “was introduced to Florida in 1905 when it was sent to the USDA by Henry Nehrling, who later noted its invasive potential (Morton 1976). It has since become extremely aggressive (Hammer 1998). By the 1980s, air potato vines were growing in thickets, waste areas, and hedges or fencerows in many parts of south and central Florida (Bell and Taylor 1982). By 1999, air potato was recognized as an invasive exotic that alters plant communities by displacing native species, changing community structure, and disrupting ecological functions (FLEPPC 2003).” – Ted D. Center and William A. Overholt

Really? How Bad Could It Be?

Air potato, the “bully” vine that will outgrow almost everything, is described and hilariously confronted by Stephen Brown, Lee County Extension Service: 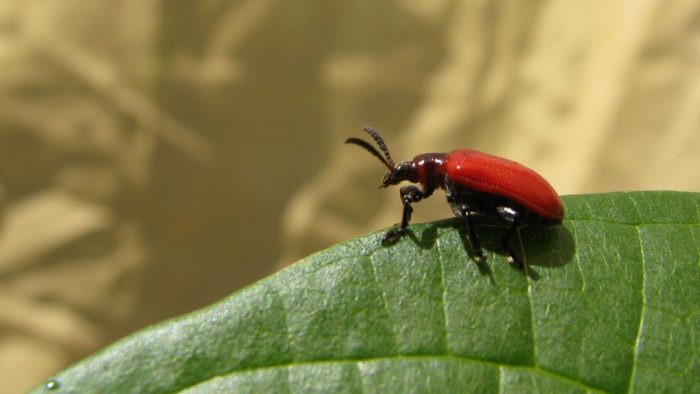 In the wise words of Yoda: “Size matters not.”

And judge the Air Potato Beetle by it’s tiny stature you should not. This little green-leaf-eating insect, a natural specialist feeder on air potato, packs quite the punch in its 5 month adult lifespan. The “Air Potato Beetle,” from larvae stage through adulthood, earns its suggested common name by consuming massive quantities of leaf tissue and occasionally feed on bulbils — negatively affecting air potato plant growth and reproduction.

At initial release sites, extensive damage to air potato was evident within three months after the first release. “Although it is too early to determine the long-term impacts of the beetle on air potato, initial results are very promising.” – Ted D. Center and William A. Overholt

AAM’s experience with the beetle?

We released somewhere around 50 beetles into a natural pinewoods/wetland area at AAM headquarters, where the infestation of Air Potato covered the ground and was climbing trees 8 to 10 ft. The beetles clocked in and began work on time, consuming air potato with a vigorous appetite that would rival Joey Chestnut. Not bad for a free program from University of Florida and IFAS (Institute of Food and Science).

Spot this little guy taking down Air Potato in your neck of the woods?

Email us a picture. We’d love to hear from you. How to recognize the beetle? Here’s what to look for:

Adults: The adults of the air potato beetle are about 3/8 inch long and 3/16 inch wide. The wings are red, and the abdomen, thorax, head, and legs are black. The body shape somewhat resembles a square violin with a short neck.

Eggs: Eggs are white and laid in groups on the underside of leaves. They are 1/32 inch long and hatch after four days.

Interested in hiring AAM to wrangle invasive species in your neck of the woods? Learn more about our exotic plant control services:


Why Working With Applied Aquatic Management Is So Satisfying: An Introspection


Lake McGarity in Deltona, Florida: A Service of Exceptional Quality


Lakefront Management Services at Lake Ariana: Before and After


by Telly Smith
More in the Blog

GET A FREE
EVALUATION & ESTIMATE

Your AAM service rep is

Learn what makes AAM the exceptional company you will be happy to do business with.

What it means to you

Is this plant my friend or foe?